Check pilot ladder condition before every use > 자료실

Lessons learned: Check pilot ladder condition before every use

There has been a tragic increase in marine pilot fatalities in recent months and pilots around the globe are paying particular attention to the conditions of pilot ladders of the vessels they board.

Many have refused to board vessels where ladders are in poor working condition. The American Club has reached out to the marine pilot community regarding some of the main concerns they have with pilot ladder arrangements.

Your safety as well as the safety of your fellow crew mates is every crewperson’s responsibility. The same responsibilities apply to those visiting your vessel, including marine pilots. 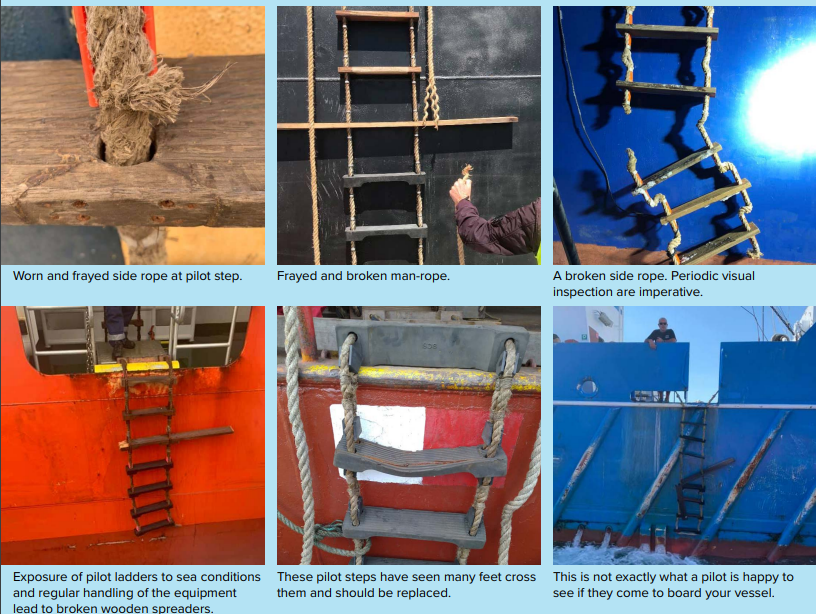 Lessons learned from pilot ladder that did not meet SOLAS standards

CHIRP reports an incident concerning a pilot ladder that did not meet SOLAS standards.

The pilot ladder had a broken strand. This was not visible before the pilot started to climb the ladder, as it was located at the top. However, it was clearly visible to the ship’s staff.

The Master was advised that the ladder must never be used again and must be taken out of service and destroyed.

Damage to pilot ladder side ropes is often caused by the ladder not being stowed away off the deck in a safe, well-ventilated storage locker. By being left in the open, the ladder is liable to damage by crushing or abrasion or can be damaged by chemicals, or cargo dust residues which can also chemically and physically attack the rope fibres.